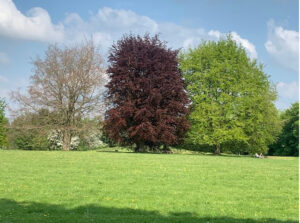 The gem that is Deddington Castle is three minutes’ walk from the villagen centre and accessible from the Clifton Road. There has been a castle here since Norman times but don’t expect to see great walls of stone.

There is something more astonishing: an enormous grassed site, eight acres in extent, surrounded by banked ramparts.

Although a civic amenity (the outer bailey is owned by the Parish Council), it is an English Heritage site 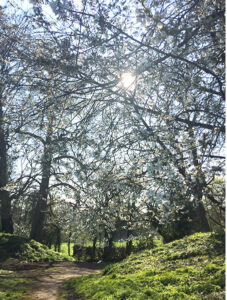 What is special about the site today?

Until the building of the Windmill Centre in 1986, the Castle Grounds were the focus of parish life, where cricket, football and even bowls matches were played, fetes held, an estimated million rounds of ammunition used during the 30 years of the Rifle Club’s tenure. Perhaps the Castle Grounds have benefited from this shift of parish activity, with more municipal activities taking place in the extensive Windmill Centre, leaving the Castle Grounds to pursue its peace of a thousand years. People come here to exercise dogs, to stroll and see the changing seasons and enjoy the views; villagers come tobogganing; local primary pupils are brought for free-ranging visits; all-comers charmed by the unexpectedness of this quiet safe expanse inside its rampart walls. A village questionnaire was held in 2014, and the Deddington News reported (March 2015): ‘Among “Youth activities and facilities in the parish”, the most highly rated is the Castle Grounds, perhaps the nearest we have to a wilderness.’

Role of the Friends of Castle Grounds

In 2009 the FOCG was formed with the simple constitution ‘to improve the appearance and use of the Castle Grounds for the benefit of the parish in conjunction with English Heritage and the Parish Council’. Our work involves liaising with these two bodies over natural planting and upkeep: tree management, mowing, wild flower planting and other areas of stewardship which preserve its ‘rural location’ (English Heritage’s words) while increasing its use as a pleasant accessible site which Deddington is so fortunate to have intact after a thousand years.

It is a magical enclosed space, still wild, where the light can play tricks on the eyes, where deer and badger still venture from the adjoining fields. If you would like to join the Friends of Castle Grounds, you would be made most welcome; you can download our membership form here.

The first of 200 Woods on Your Doorstep in England and Wales, a Woodland Trust millennium project supported by the Millennium Commission among others. (Daeda was a Saxon who lived in about the 10th century; the name Deddington derives from Daeda and “tun” meaning settlement.) The nine-acre arable field was bought by the Woodland Trust, assisted by substantial contributions from local residents, many of whom helped plant the 3,500 trees in November 1996 and, later, sow the seeds for a wild flower meadow.

The contorted northern boundary is formed by the River Swere, so the trees planted had to be suitable for a sometimes wet terrain: ash, five species of willow, oak, alder, grey and black poplar, aspen, downy birch, osier, hawthorn, blackthorn and guelder rose.

A stretch of path gives wheelchair access and there are two seats. However, Daeda’s Wood will be allowed to develop as naturally as possible: so expect to see grass and rank vegetation left to provide habitats for insects and birds. When the trees are mature enough to create a canopy this will change the habitats again. Several grass rides wind through the site.

The variety of wild flowers will increase and change as the wood develops. From spring you can expect clumps of white campion, pink threads of delicate ragged robin, the bold ox-eye daisy; later, lovely mauve clusters of meadow cranesbill, purple knapweed, the scarlet splash of poppies, and waving banks of rosebay willowherb. Later still there will be the handsome rose-pink musk mallow, white or pink flowerheads of yarrow, and large white heads of angelica. Purple loosestrife will add their bright spikes to the Swere’s banks, and water lilies drift in the stream itself.

The Berks, Bucks and Oxon Naturalists’ Trust (BBONT) chose the Swere’s banks as one of their sites for an otters’ holt. Section

s of the river banks are also home to the unusual beautiful and banded demoiselle damselflies. There is already a wide variety of birds. In winter sizeable flocks of visiting fieldfare settle noisily in the mature trees, or on the surrounding fields. Along the river you may see the brilliant flash of a kingfisher, the flurry of mallard or moorhen, or a heron at lift-off. Flocks of yellowhammer are ever present; often tree sparrows or groups of long-tailed tits flit through the trees. Usually there’s a kestrel on the hunt, possibly a great spotted woodpecker. As the trees grow there should be increasing summer populations of warbler – willow warbler, chiffchaff, blackcap, garden warbler. And, who knows, perhaps one day a nightingale.

See here for a history of the Wood

A Diary of Daeda’s Wood

Published in 2006 to celebrate the wood’s 10th birthday, A Diary of Daeda’s Wood follows the wood’s development from cornfield to full-blown woodland. It includes a diary describing the highlights of each year, features on Daeda’s flowers, butterflies, animals, birds and river, and plans for the future.

The Natural History of Deddington Parish

An inventory of the woody plants of the parish is being made, as well as surveys of bird life in association with selected hedges in order to test the proposition that the more wooded a hedge the more diverse the bird life.

The report is divided into chapters including: deciduous woodland, oak trees, of which 497 have been mapped, green lanes, stream and riverside vegetation, the flora of the Castle Grounds, and a detailed analysis of species composition of the hedges and hedgerows. Of 850 hedges, details of 598 have been recorded. Hedges commonly have three to five species of woody plants, excluding bramble, ivy and rose; species-rich hedges range between six and 13 woody plants. Some of the most species-rich hedges, not surprisingly, are in the oldest part of the parish where there is a greater presence of field maple (Acer campestre) and dogwood (Cornus sanguinea) than in any other part. Hedgerow trees are most often ash and oak.

The photograph was taken from the old

orchard of Ilbury Farm, below the site of the iron age fort with apple trees (Malus agg.) in bloom and two oak trees (Quercus robur) in view; the one right of centre is 98cm in diameter. Beyond is a field of oilseed rape in bloom in Nether Worton parish, with Hawk Hill in the background.

There are 11 woods, none is large or extensive. They vary in species composition, ash dominant in one, sycamore and crack willow in another; and on the oldest sites there are bluebells and ramsons. While the parish is nearly completely encircled by rivers and streams, wetland habitats are rare, but there is a tiny marsh near South Brook and seeps, springs and ponds in fields occur throughout the parish. To date, 415 flowering and non-flowering taxa have been found in the parish.

These studies were to have been included in Walter L. Meagher’s book Aspects of the Natural History of the Parish of Deddington, but he died in 2010 before it was completed. Here are three chapters: